A PTN UpdateAs an opening gambit on a recent trip to my favourite loch I settled on a two fly cast: an olive soft hackle wet fly on the point and a furnace hackled PTN on the dropper. It was a very atmospheric setting. The sky was overcast and grey. Everything was wet from the constant light drizzle. Low patches of cloud covered the hills in front of me. There was hardly any wind which created a smooth, mirror like water surface. And on that mirror like surface the boils of feeding trout could be seen. From the rise forms the trout were feeding on nymphs just below the surface. Occasionally they would splash and slash at the newly hatched adult olives on the surface. A few minutes of observation and the formulation of a strategy led to my opening two fly gambit.

From my second cast I began having success with a few small trout. The first one fell for my olive soft hackle wet fly. They weren’t big but they certainly were beautiful wild brown trout which were all quickly released back into the loch unharmed.

I cast my soft hackle wet flies at an acute angle to my left to land them just in front of some trees immediately on my left. I had seen a few boils in that area and wanted to cover any trout hunting pupa there. After tightening once more into a take I soon realised this fish was a bit different. It stayed deep. This seems to be a characteristic of the larger brown trout there. I could feel the fish shaking its head and knew it was a good one. I played it carefully, fearful that at any moment the light wire barbless hook would straighten or drop out. Things went my way however. My luck held and I slid the fish gently over the landing net. I knew it was a good fish but I was astounded when I saw the size of it in the net. The fish was 42cm in length and was a really thick solid fish! I had had my hook straightened in the past on more than one occasion and knew this fish was more than capable of doing the same. But at last a truly special fish from this difficult water lay in my landing net. To top it all off it had taken my soft hackle pheasant tail nymph dropper fly! After a quick camera phone photo the fish which I gently held in the water swam strongly away (and soaked me in the process with a flick of its tail!). After it had swam off I realised my hands were shaking: such a truly magical creature!

But that is not all. After my 42cm fish I went on to catch a large second fish. This one measured in at 37cm and it too was a beautiful, solid and thick set trout. Once more after a quick photo it swan strongly away. Again it too had fallen for the soft hackle pheasant tail nymph on the dropper. At the end of the session the PTN had accounted for seven of the eight trout I caught that day. In my original post about soft hackle pheasant tail nymphs I mentioned that the one occasion that I had had a trout take a PTN that the weather conditions were grey, drizzly and wet. Just like this session was. Interesting… 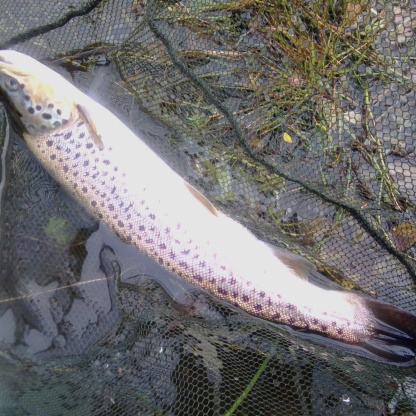 On my last session I had numerous fish of between 32cm – 38cm all to the pheasant tail nymph with the fire orange thorax, fished in the dropper position. Tight lines!