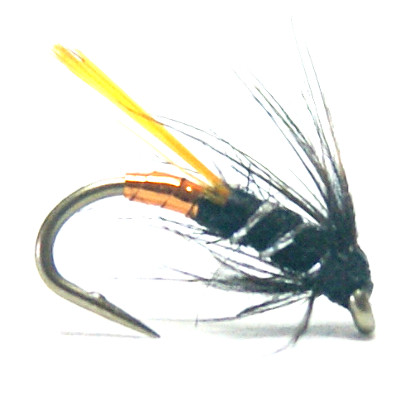 Another Small Black SpiderFollowing on from my last post, here is the second #16 spider that proved succesful in flat calm conditions during a recent trip. Subconsciously, I’d tied a Kate McLaren…well almost! You know how it is when you have something in mind at the tying bench but you’re not sure exactly what the finished fly is going to look like? I wanted a small black spider pattern to fish in flat calms, but one with a little bit of sparkle and a hint of colour to make it stand out in a crowd of naturals. It was going to be one of those eye of toad, wing of bat tying sessions! A bit of this and a bit of that, tied round a #16 Kamasan B175. By the time I had whip-finished the head of the fly I’d realised I had a Kate McLaren in my vice. Well almost anyway. The Kate McLaren of course sports a black palmered cockerel hackle along the body and a red game hen hackle at the head of the fly. The finished fly does however have a passing resemblance to the Kate McLaren, which is a fantastic fly for the wild brown trout inhabiting our lochs. It was also the fly that I caught my first loch dwelling brown trout on. From what I understand the Kate McLaren was first tied in the 1930s by a Glasgow tackle dealer for his friend. The tackle dealer then kindly named it after the recipients wife Kate. Initially a seatrout pattern it has become an essential (and famous) wild brown trout pattern for the lochs ever since.

So, with my black and slightly sparkly spider pattern loosely in mind, I put a #16 Kamasan B175 into the vice. I played around with gold and silver tag materials but settled on copper tinsel. The pheasant crest tail and silver wire rib were added and a very light and fine black dubbing was used to create the body. After ribbing the body with the wire a soft black hen hackle was wound and the head whip finished.

Initially it did not do too badly in the flat calm conditions and we will see how it goes over the season ahead. It is a nice wee pattern and I quite like seeing it in my box of flies. It does add a splash of colour and a bit sparkle to the box. One thing is for sure: if it is even a tiny bit, no wait, even a tiny-miniscule bit as succesful as the original Kate McLaren I will be a very happy angler indeed!