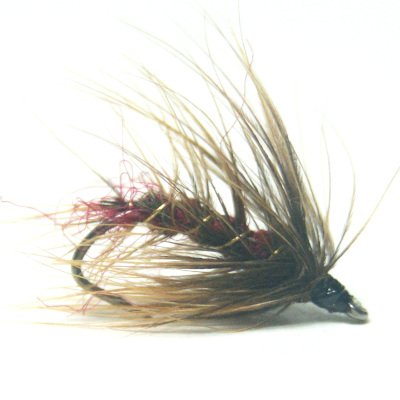 Claret dubbing, sooty olive dubbing and furnace hen hackle: three of my favourite flytying materials. What would happen then, if I combined all three into a palmered hackle wet fly? The resultant pattern would be a useful addition to the palmered hackle wet fly section of the fly box and may specifically prove its worth during a sedge or olive hatch. Well, so I reasoned anyway.

After forming the body with a 50-50 mix of claret and sooty olive dubbing, I secured the palmered hen hackle with a gold wire rib. Adding a second hen furnace hackle, this time at the head of the fly completed the palmered wet fly pattern.

Overall, I was fairly happy with the result. The hackle looks a bit heavy in the image but in reality it is sparser. In the image the palmered and head hackles are compressed and combined due to the angle of the fly during the photographing process. The claret and sooty olive dubbing creates a nice effect which is enhanced by the gold wire. The palmered furnace hackle seems to fit in well to the overall colour scheme of the fly and the dark base of the palmered hackle blends in nicely with the dubbing mixture used for the body.

Palmered hackle wet flies are perhaps one of the oldest types of fly dressing used in flyfishing today and to me, there is a sense of something ‘ancient’ about the pattern. I know that I am already looking forward to fishing this pattern next season.