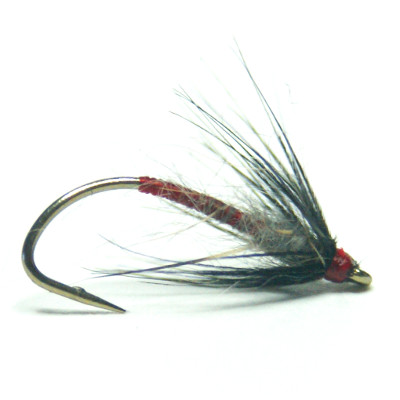 A bit of Iron WillThe Iron Blue soft hackle pattern has been around for a little while and there seems to be a variety of dressings out there. Here is my version. Regular followers of this blog will know that I am tying these patterns to fish in stillwater just to see how they go. Perhaps strange then to see a tying of the Iron Blue here, given that the natural Iron Blue lives in running water! Well perhaps it is. To be honest I just liked the look of it! I also thought it would transcend the running water of the stream or river and may prove useful on stillwater too. I used red thread for the abdomen and under body although some other dressings call for wine, claret or dark claret thread. The dubbing is grey rabbit and again other dressings suggest other material such as mole. I have used a soft black hen hackle and once again other dressings offer alternatives. But that is the great thing about tying your own flies: you can use alternative materials to create more of a bespoke pattern.

Once I had taken the thread down towards the rear of the hook (Kamasan B410) I just touch-dubbed a tiny amount of dubbing along the abdomen. A little more formed the thorax and then the soft black hen was wound, just a turn or two, to form the hackle. Once formed the head was whip-finished to create the Iron Blue.

What would a stillwater trout take this river pattern for? Well possibly just as something alive and edible, nothing specific. It could be taken as midge pupa or perhaps as a drowned terrestrial. Then again do we ever know, for sure, why a trout takes our pattern?