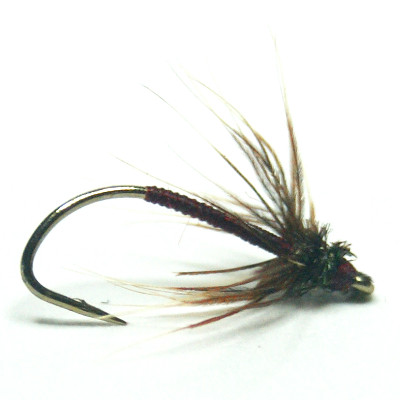 A Small ClaretOne perhaps for when the  buzzers are hatching. Anyone for a glass of claret or should that be, anyone for a claret soft hackle? Don’t you just love claret as a colour? It certainly can be a very effective colour in wet flies and it looks even better when the fly is wet. Here I have used 8/0 claret tying thread on a Kamasan B410 but of course you may use any shade of claret that takes your fancy such as dark or light claret. The hackle is a brown hen hackle with lighter brown/gingery tips. It was purchased as a job lot of non-specific capes and as such I can’t give the colour a definitive name. But I love that it doesn’t fit neatly into a colour definition, its just a natural brown feather that happens to have lighter coloured tips. The head of course is peacock herl and in retrospect I think I would tie in the herl first before tying the rest of the fly. In this way I could have had the herl butted right next to the hook eye. I think I will do that when it comes time to retie this pattern (and the other needle fly patterns too). Well, we all live and learn don’t we?

I plan to probably fish the Claret Needle Fly just subsurface during a midge hatch but it may make a reasonable searching pattern fished at different depths too. Time will tell. Either way I think I will probably fish it just like when imitating a slow moving nymph: using just the water current and wave action to fish it round in an arc.