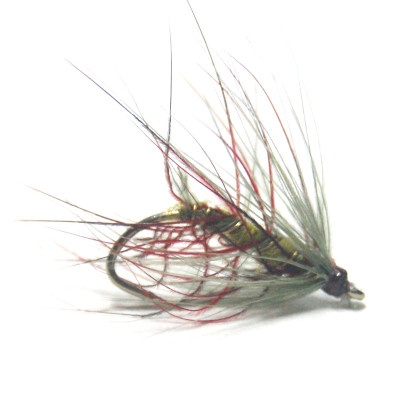 My initial idea was to create a slim, sparse and mobile palmered wet fly dressing which may come in useful on those difficult days, when mobility within a dressing is crucial to success. I opted for a drab, olive coloured dressing overall. However, I wanted the dressing to contain a bit of drama and the subsequently incorporated red-dyed grizzle hen feather used for the body hackle, provided a bit of attention grabbing colour. The hackle was stripped along one edge giving a much sparser palmered hackle. This sparseness leads to a more mobile hackle and therefore, to more movement and life in your pattern. You can perhaps see in the image how soft the red grizzle body hackle is. It looks for all the world like the body of the fly is being evacuated by a mass of blood-worms!

The dressing of this palmered hackle wet fly is fairly simple and during its construction I really focused on creating movement in the dressing. This was achieved by using soft hen hackle for the palmer and collar hackles and by stripping the fibres from one side of the feather used to create the palmered hackle. If the palmered hackle is slightly longer in fibre than normal, then this too adds a bit more mobility into the fly. Finally, the gold wire rib adds a little bit of flash into the dressing.

Over the coming weeks I will post a few more of the flies that I have tied during these strange times. I hope you enjoy the posts and thanks for reading.