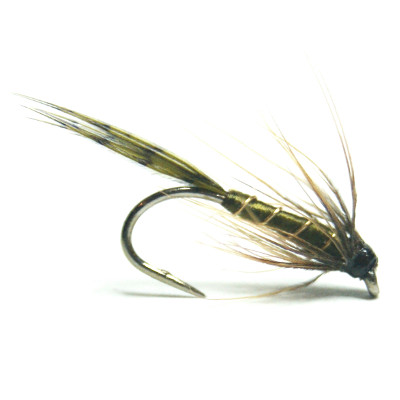 I wanted to tie a soft hackle wet fly that would suit general searching tactics, perhaps when nothing obvious was hatching on the day or where you wanted to explore a new fishery or piece of unfamiliar water. I find that olive-based softhackles are a good option for this purpose and that olive as a colour, should not be under-represented in the fly box. I find that the more sombre coloured softhackles work well for me when on the water, leading to an increase in my confidence in the fly I am using, and in flyfishing, having confidence in your fly is just so important.

When considering the components of this softhackle wet fly, I opted for an overall dark-olive appearance but with a subtle hint of flash, which would be provided by the fine-wire gold rib. Unusually, I opted for some olive dyed partridge fibres for the tail. I just really liked the dark mottled effect of the feather. You could always use a dyed grizzle hackle instead of the partridge, and given the choice, I may have done so, had I had any on the bench! I may need to go shopping.

Tying the fly was as you would expect, was fairly straightforward, paying attention as always to proportion and shape. For these reasons that dyed grizzle (or similar) hackle may have come in handy as the tail looks a bit on the thick side in the photo (doesn’t appear too bad on the fly though). The fish don’t seem to mind. After tying in the tail and rib, I formed the body with 14/0 olive Ultrathread which has a nice sheen to it. You can also flatten it which helps keep the bulk down. The fine-wire gold rib gives the fly a bit of sparkle and I finished the fly with a furnace hen hackle. I used black 8/0 thread which allowed me to create a small, neat head. I like the effect of a furnace hackle sitting below a black thread head, it just looks right to me somehow.

So, that is my little Olive Partridge softhackle. I can envisage fishing it just beneath the surface on a grey, wet day when the olives are around or as initially intended as a general searching pattern. Thanks for reading.