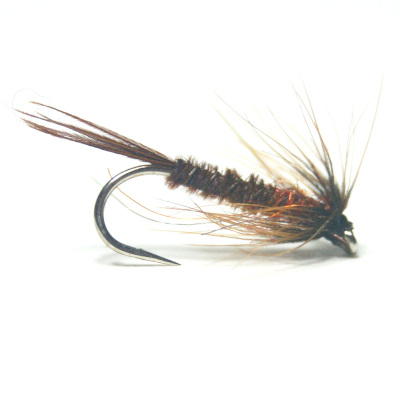 the same but different

Following on from the previous post, where I mentioned that the Fiery PTN suffered a bit of damage from the teeth of the trout, I decided to see if I couldn’t make the pattern a bit more robust. I suppose I could have just continued to fish the pattern sans tail, but I like a tail on my olive nymph pattern. It just seems right somehow. I reasoned the thing to do would be to replace the tail with something like brown hen fibres, rather than the pheasant tail fibres originally used. After having tied them in and looking at the finished fly, I was pleasantly surprised at how similar the tail looked. In each case I was just using a few fibres to the form the tail so any difference would be minimal anyway. The other addition I made to the dressing was in the abdomen of the fly. I used more turns of the fine copper wire rib, since the previous version suffered a bit of damage there too. The additional turns would add a bit more robustness to the abdomen. The rest of the pattern remained as per the original tying.

I had the opportunity to fish it last week and it managed a few fish to the net during the session, along with many more nips, pulls and tugs of varying rigour. The tail remained in its original state and the abdomen too has remained undamaged. The hen fibre tail hasn’t detracted from the originals appearance (at least to my eye anyway) and the additional turns of the fine copper wire, resulted in a brighter segmented effect in addition an increase in robustness. The copper wire actually came from some old electrical cable I had (I think from an old computer/network cable). It is a bit of a task stripping off the outer plastic coating but it was worth the effort as it gave me plenty of very thin copper wire that I could use. And of course, it was free!