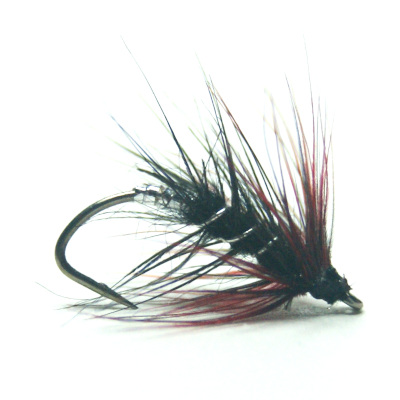 for the terrestrial fall (… or not …)

I recently purchased a red grizzle hen cape which, as it turned out, I was rather really pleased with. But it left me with a slight dilemma: what to tie with it! I bought it in addition to a blue grizzle hen cape (… and a claret one …) thinking I could use both the red and the blue capes when tying up some palmered hackle wet flies or perhaps soft hackle wet flies. Looking online and through my reference books, I was surprised by the lack of red hackled wet flies that I found. So, I decided to put a palmered hackle wet fly pattern together of my own design (although I am sure the resultant pattern will have been tied a long time before I came along!)  using the red cape first. I suppose a heather fly pattern was the obvious choice for utilising the red grizzle hen hackles. I have found through experience that a fall of heather fly cannot be relied upon to occur at any particular time, but that shouldn’t matter too much. I remember one recent pre-season walk which took me passed seemingly hundreds of heather fly and prompted me to think that it was going to be a good season for the terrestrial insects, but the reality was, I didn’t see a single heather fly all season! But fall of heather fly or not, I’m going to give the pattern a swim this season, either in or just under the surface.

The pattern utilises that well-known and very effective colour combination for wild brown trout: red, black and silver: very Bibio-esque! There are a few insects that adopt this colour scheme including of course the heather flies, shield bugs and soldier beetles. The hen hackles should give the wet fly plenty of movement in the water and that silver tag and rib, should add a nice touch of sparkle when the pattern is fished through the waves and will hopefully help to draw the attention of a passing brown trout…or two.