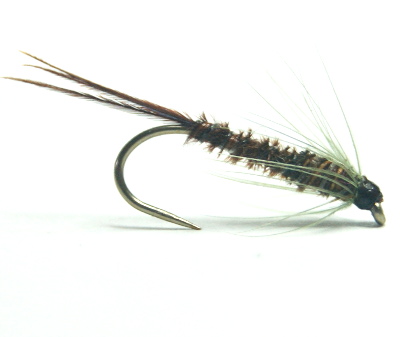 Dominance of Small Black Spider Patterns End?Some RAIN at last and this simple olive-hackled PTN has finally broken the dominance of small black spider patterns for me. I mentioned previously that the trout seemed to be fixated on tiny black insects this season such as black chironomids and that consequently the fly of choice, for me anyway, was black spider type patterns in a #16. This was despite there being decent numbers of pond olives and sedge present. Indeed, this season seems to have seen some good insect hatches to date.

At last we finally got some cloud cover and rain, rather than the uncomfortably hot temperatures and bright blue skies, to accompany the strong westerly or south-westerly winds that seemed to consistently be present on each outing this season. Assessing the conditions and consequently what may be hatching, I opted to open with a PTN on the point and a claret flymph on the dropper. The wind was a gusty westerly\south westerly with good cloud cover and constant but fine rain, whilst being warm enough to encourage a good hatch. These conditions suit the pond olives quite well and so suggested that a PTN would be a good choice of pattern to start with. I opted for the Olive PTN. Fishing in front of a small patch of off-shore weeds, my first cast of the day resulted in a solid take, but I missed the take! Over the course of the session the Olive PTN proved to be the most consistent fly pattern and I ended up with five fish to the fly, another lost at the net and one or two dropped fish, along with a multitude of very fast, jarring takes, probably from smaller fish.

The Olive PTN consists of just three materials excluding the hook (Kamasan B410): natural pheasant centre tail, low diameter tippet material (clear) and a soft grey-olive hen hackle. I like to keep the body nice and thin with a slight taper to form the thorax. The rib is an excellent way to use up any off cuts of low diameter tippet material and helps to discreetly protect the delicate pheasant tail fibres from the fish’s teeth. I kept the hackle short and sparse and olive is often a good colour to incorporate into your patterns. The Olive PTN was fished very slowly just sub-surface using a very, very slow figure of eight retrieve with lots of pauses. At one point the fly on the leader lost its tail to the fish, but I wasn’t too bothered as it didn’t seem to matter at all to the trout, and more takes were forthcoming. You can of course always incorporate a tail of brown or ginger cockerel fibres to form a more robust tail if this is important to you.